The six oral Evidence sessions will be held from October 2020- March 2021. Witnesses will be called in front of the panel (see the Commission below) to provide evidence from the various practice areas within legal aid and in relation to those areas which LASPO removed from scope. The testimony will feed into the information being gathered in relation to the financial barriers to practicing legal aid, the emotional cost to practitioners and the difficulties associated with providing a service in these circumstances. Each session is expected to last no longer than 2.5 hours and witnesses will join the meetings virtually in order to comply with COVID-19 guidelines. Each session will be attended, in an observational capacity, by justice ministers and/ or senior members of the MoJ and Shadow Justice team. Sessions will be broadcast live through Parliament TV or Zoom.

To book tickets for the Westminster Commission into the Sustainability of Legal Aid Oral Evidence Sessions please click on the links below.

During our next oral evidence session, the Westminster Commission on Legal Aid will be hearing evidence about the realities of working at the publicly funded Bar from:

JOIN US: The Bar | ACCESS TO JUSTICE | JUNIOR LAWYERS 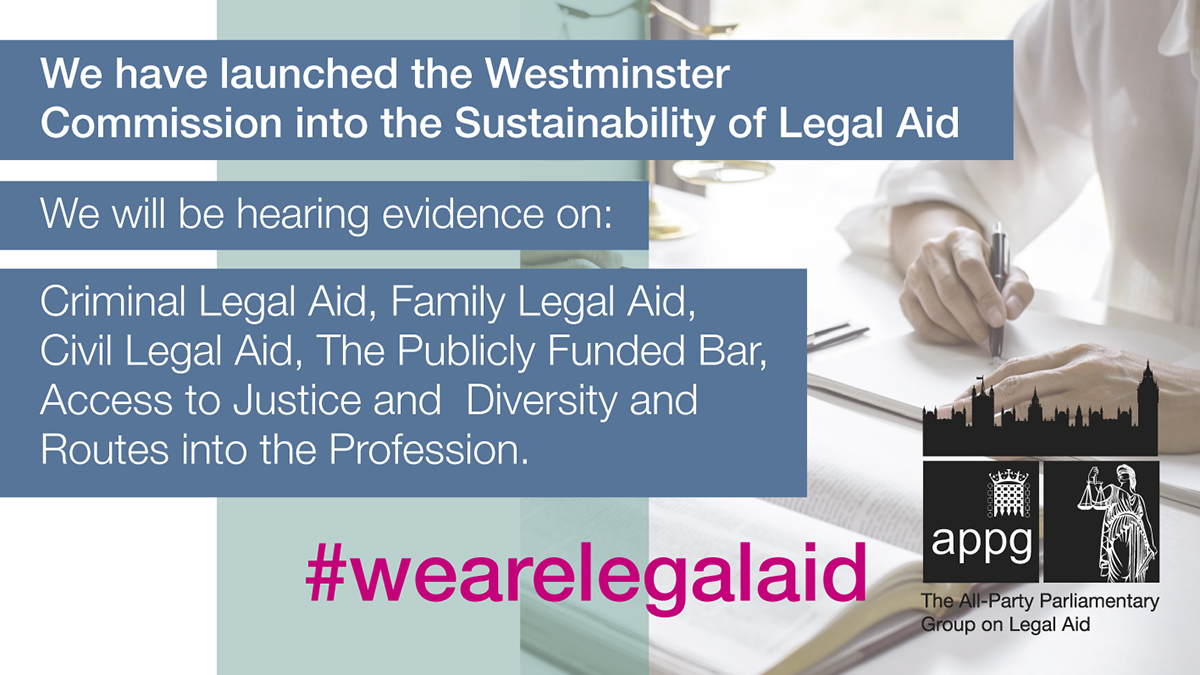 At this critical point in the COVID-19 pandemic, it would be easy for legal aid to fall off the policy agenda in Westminster. However, as evidence to the Westminster Commission on Legal Aid has shown, the pandemic means that access to legal advice and representation is more important now than ever. From people who have been refused access to health and social care to bereaved families navigating the inquest process, it is often at the most difficult times that people need support from a trained legal professional. However, those on the frontline are warning that the sector is on the brink.

That is one of the many reasons that the cross-party Commission came together to investigate the state of this vital legal safety net. The third session began with introductions by Chair Karen Buck MP, a long-standing champion of legal aid. Bob Neill MP, Chair of the Commons Justice Committee, made an opening statement in which he described legal aid as a, “civic right like access to health or education”, telling the panel, “It is something we should be ready to argue for”. Karl Turner MP, Shadow Legal Aid Minister, warned of a system in crisis; “there is a justice gap, which should be a national shame… LASPO (the Legal Aid, Sentencing and Punishment of Offenders Act 2012) tore apart legal aid. It is unrecognisable”.

The first witness was Jo Hickman, Director of Public Law Project. She powerfully explained how it is now more difficult for ordinary people to challenge unlawful decisions by public authorities. She gave examples of clients who had been denied legal aid; including the woman whose partner was convicted of attempted murder who was turned down for legal aid as a domestic violence survivor because his conviction had been more than 2 years ago, and the elderly, blind client lacking mental capacity who was refused funding for his case to regularise his immigration status under Exceptional Case Funding (ECF) provisions (read more on ECF here).

Nicola Mackintosh QC appeared next, describing how her clients, all of whom have a disability, are some of “the most marginalised people in society”. Almost all are in dire need of legal assistance by the time she meets them. This includes needing support to access social care and mental health services or to challenge a wrongful deprivation of their liberty. This work has been harder and harder to do since LASPO and many needy clients are completely deprived of legal aid. As an example, she mentioned her former client, Pamela Coughlan, who was severely disabled and ultimately won a landmark case to secure NHS Continuing Healthcare. The decision has since helped thousands of families with elderly relatives to access free care. However, Nicola said that Mackintosh Law would not be able to afford to take that case today because of legal aid eligibility. Nicola also pointed out that “legal aid rates were fixed 26 years ago, they were then cut by 10% in 2011, and there has been no inflationary increase since”. As a result, people must be turned away. COVID-19 has made accessing social care and other essential services even more difficult, but her firm cannot afford to see everyone who comes for help: “We are turning away people in desperate need of advice. I know they won’t be picked up by other firms. They will not get advice – that cannot be allowed to happen”.

Next up was Henrietta Hill QC, a barrister at Doughty Street. She shared the serious concerns of other witnesses about the sustainability of legal aid work. She had done a short survey of her colleagues, leading police action solicitors and barristers, and found that all had to cross-subsidise legal aid work with other types of work; “None could rely solely on legal aid work. All said that wasn’t viable”. Referring to her inquest work she said that legal aid is sadly out of scope for family members in many of the most complex, sensitive and difficult cases where someone has died (she recommended INQUEST’s work on the issue here). In addition, “families have to jump through multiple hoops and an obstructive and intrusive process at what is already a painful time” to apply for legal aid. Like Jo, Henrietta defended the important role of lawyers in upholding peoples’ rights, adding that: “there are numerous examples of the Human Rights Act giving ordinary people a legal remedy where otherwise they wouldn’t have one… this narrative about lefty lawyers is troubling in constitutional terms and not helping morale in the profession”.

Jawaid Luqmani, immigration and asylum solicitor and partner at Luqmani Thompson & Partners, appeared next. He illustrated the importance of legal aid by reference to his clients, like the young woman who had been a victim of sex trafficking but was disbelieved by the Home Office. She required legal assistance in order to go through the hostile ordeal of an appeal (in which she was ultimately successful). There was also “Abdul”, whose case went on for 6 years. He was turned down by the first-tier immigration tribunal, and then the upper tribunal, but was ultimately successful when it was established that the wrong legal test had been applied to his case. In these cases, getting the “right” and just result necessitated complex court processes for which legal support was critical.

The next witness was Rosaleen Kilbane, a housing solicitor and founder of the Community Law Partnership (CLP). The CLP saw the effects of LASPO quickly – almost as soon as it came into effect, they had to let go of their debt and welfare benefit supervisors. As a result, they cannot offer the same holistic service they used to; dealing with peoples’ clusters of problems. Without support, for example on welfare issues, it is often difficult to solve the root cause of housing problems. Rosaleen worried about the future of her firm, saying “I don’t think we can survive in our current form. If we don’t survive, I don’t know where people will go”. CLP generally turn away around four people for every one that they take on because there is such a shortage of housing lawyers. She described one desperate client, a wheelchair user who couldn’t access the toilet in her accommodation. By the time she came to CLP she was starving herself in order to avoid using the bathroom. The pandemic made it more difficult for her to get help finding suitable accommodation. CLP successfully brought a judicial review to compel the local authority to rehouse her – but they must make these applications at their own financial risk. Rosaleen stressed that these cases are about poor people being able to enforce their rights and statutory bodies being held to account. Yet she concluded, “We are very worried about our future. There are so few of us left. The need is huge and we can’t meet it”.

Polly Sweeney, solicitor and partner at Rook Irwin Sweeney, had similar concerns about the fate of legally aided firms. In one of her specialist areas of school exclusions, she described how the provider base is “completely damaged and destroyed” to the extent that “there are now just 8 law firms nationally able to provide advice and assistance in this area” under legal aid contracts. She said that Legal Aid Agency (LAA) renumeration simply wasn’t enough to cover overheads.  Like others, Polly must turn clients away, which is “heart-breaking”. One client she turned away approached ten firms nationally. Only two said they might be able to take his case but he had not yet had any confirm they could definitely help.

Almost all witnesses also had concerns about the barriers to young practitioners training in their areas of law (this theme will be examined further in the final oral evidence session). They also spoke of difficulties retaining existing trained practitioners. Nicola Mackintosh QC said, “we are the last bastions of this very important area of law”. The picture coming from the witnesses was clear; they are working incredibly hard to uphold their clients’ rights and provide a high quality of work, but that job is becoming increasingly more difficult. Funding reductions and LAA fee structures make it impossible to support every client who needs assistance, forcing them to turn away vulnerable people. The future of firms and of the next generation of practitioners is under threat.

Karen Buck in Chair ended with a powerful reminder of the need for action, pointing out that “18 civil legal aid providers are no longer in the field since this Commission started in September – we’re in a race against time”. For every one of the providers that has already closed, they leave yet another part of the country in which vulnerable people will no longer be able to get the legal advice that they desperately require. As the evidence in the session showed, there is simply not a second to waste in restoring legal aid for those who need it most.